So here we are in the 21st Century and still stuck with 18th century schoolrooms and 19th century desks.

I've been exploring different seating arrangements for groups, and still like the easy mobility of wheeled chairs, central gathering places, and ways to quickly create breakouts of small groups that can still see the teacher/board and report back without too much furniture noise.

This younger children's class (described by Amy Spies at TeachingChannel  shows a nice option using the furniture at hand: 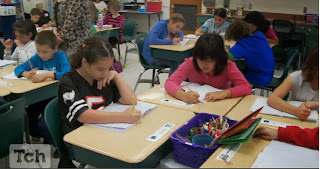 The groups of four are open-ended at the side facing the teacher/board, and the space between the desks holds a 3-drawer cabinet with supplies like paper, pencils and crayons: 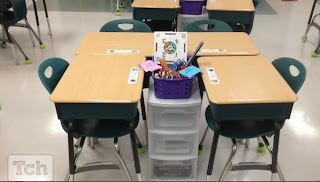 SteelCase offers a much higher tech option, adopted at the U of Oregon's Yamada Language Lab, that is sleek and classy. Three boards/projection screens allow students sitting in any direction to see what is happening. The teacher is no longer fronting the class--at least in theory--though the computer/projector now seems to be the center: 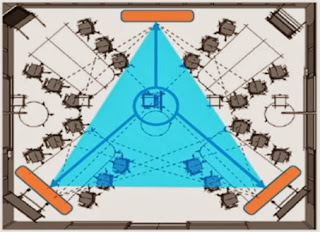 From the Steelcase video

What students have to say about it is very interesting:

From the Steelcase video


With the flipped classroom, the projection multiplication may be a bit of overkill, but at least there is a strong move to put students' heads together.

I just discovered -- from R. Byrne's great blog, Free Technology for Teachers -- an excellent video annotating tool, Embed Plus. Here is a sample of how the embedded annotations appear from a video at YouTube by the U.S. Department of State/University of Oregon, Shaping the Way We Teach English:

You will notice that you have all the usual features of YouTube videos, such as closed captioning and expand to full screen, but also the video can be slowed and a button allows an easy repeat of individual scenes. The nice thing is that because you are embedding rather than downloading, you don't have to own the video to annotate it. You can also get the video to start at a specific place, rather than the beginning, thus eliminating sometimes annoying introductions. 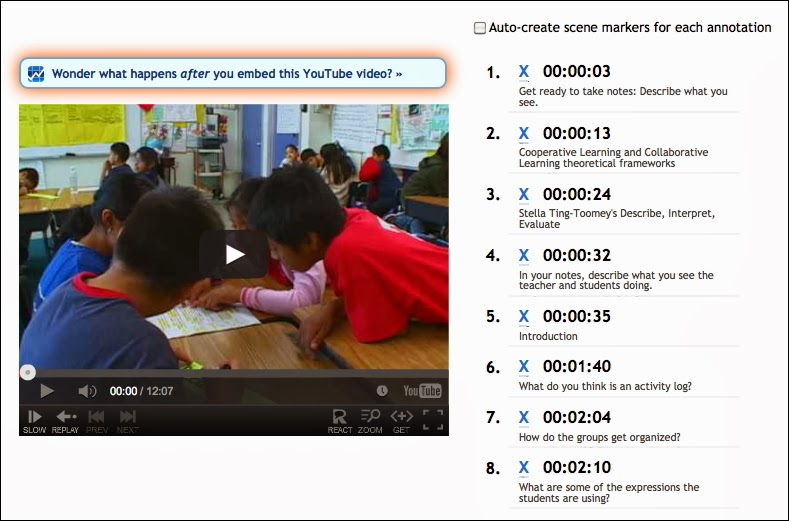 The editing interface to add captions is extremely simple (see left), and it's easy to change your mind, replace annotations, etc. You can use any YouTube video and embed in your blog, as I have here, or embed in WordPress, which has a slightly different interface. Although the site is fairly new, there are several examples to show you how it's done.

I'd strongly recommend this tool if you are using authentic video, documentaries, etc. If you upload your own videos to YouTube, Embed Plus would make them more valuable to your learners. You could, for example, add directions for note-taking, as I have in the sample above. Or place a strategic assignment. Pro features, for as little as $14.99/lifetime, may be worth the cost, since you could then link to other websites.

I don't see how this tool can continue without charging anything, unless Google buys it.

Bloom's Taxonomy -- Is It for Language Learning/Aquisition?

I've been poking around in the various versions of Bloom's taxonomy of learning lately, while developing materials for a DoS-UO MOOC. I've decided it has a few inadequacies as a way of talking about language acquisition. Below are two recent versions of Bloom (old and new): 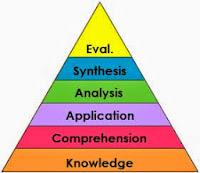 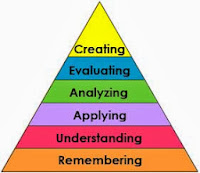 We can immediately see that language learners often comprehend/understand language when it is appropriately contextualized, but they may not remember the actual words later. So these attainments cannot really be measured or tested.

Also, being creative (top of the pyramid) with language is quite possible long before the learner is able to evaluate or analyze new terms. In fact, being able to describe or define new terms is often quite separate from being able to appropriately use new terms in context.

So the language teacher must keep in mind that  Bloom's taxonomy is not really a one-way street, bottom to top in the pyramid. In fact, trying to get students to remember words before they have had an opportunity to understand or apply them can be deadly. We see this in classroom practices where students are "introduced" to vocabulary before a reading. Or (failed) attempts to memorize long lists of vocabulary words in isolation, which is still the practice in some EFL situations.

I suspect Bloom's taxonomy, although it is superficially useful, will be "overthrown" eventually. As you can see from the old and new versions in the illustration above, there is already some pressure to revise.

I've been away, mostly vacationing, but also working with the Electronic Village Online, which has been experimenting with some new venues, such as Edmodo and About.me. Hope to have more time to report later, but here is my personal About.me/ page: 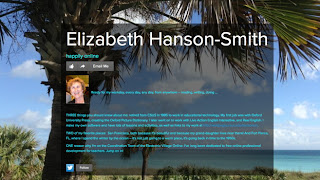 Oddly, when I tried to embed it here, the script does not show the snazzy overlay with my picture. You'll have to visit the page at http://about.me/ehansonsmi/ to see it. However, it is kind of a handy way to do a short biography. The "3-2-1" snippet about me is an idea suggested by the EVO Coordinating Team to introduce ourselves quickly. Might be a good way to do introductions in a class. The student chooses the background and icon, and writes the text.
Posted by Elizabeth H-S at 06:58 No comments:


I've been exploring several drawing tools, particularly those for making graphs and diagrams. I'm trying to stick to free and online in this discussion, though a few for-pay tools have some nice advantages, mainly storage space and collaboration.

Among other advantages, drawing tools can help students mind-map and brainstorm; collect and display numerical data in charts and graphs; demonstrate reflective learning in storyboards or networked images; and so on. Graphing skills become increasingly important as an academic tool as students progress through school, but charts and graphs can be a fun motivation even for younger students.

Gliffy is one of my old favorites, but it limits you to just 5 drawings, unless you go for the somewhat pricey paid account (5 users for up to 200 drawings, for about $10, as of this writing). It does very nice Venn diagrams from templates, has loads of pre-formed objects, such as arrows and rectangles, and supports HTML5.

Cacoo is entirely free and looks like a very friendly interface, and one appropriate for middle school kids. You can create:

Cacoo is one of the free programs with a free-hand drawing option, too.

Creately is another free program with great features, and like Gliffy, allows up to 5 drawings with limited collaborative possibilities.  It gives you only diagrams, but offers nice Venn templates, and a large selection of templates for K-12, including: 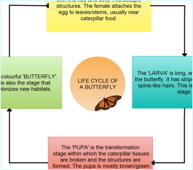 Google Drawings has only a very basic toolkit, so don't expect a great deal, but it is quick and easy and the interface will be familiar from Google docs.


If you want a very professional look, but have only a limited project, try Microsoft's Visio or SmartDraw. Both of these have a free trial period and many features.

Recently I tried to organize and curate my YouTube channel to better effect. My first problem was that as an inveterate Mac user, most of the videos on my desktop were in .MOV format, and even though this was purportedly a YouTube-supported format, I could not seem to upload some of my videos.

Some of the most popular video formats supported by YouTube (directly from their Help site:

The only error message on the YouTube upload page was something to the effect that "There is a problem with your file."  After much trial and error, here are some things I learned about video file formats and YouTube.

Believing the .MOV file format might be the problem, I tried about half a dozen free video converter software apps on my long video. None of them would convert a video of any length for free, despite plastering the word "free" all over their download sites. 100 MB is about the limit without paying extra, including online converters. I finally came across QTAmateur.app at the Mac Update site. Despite the dopey name, this little software is very powerful and converts to many different video formats quite easily, including those usable by PCs and mobile devices. And it is an absolutely free download. Use ("Export" to make the conversion.)

This was a fortunate find, as I want my videos to eventually be playable on mobile devices as well as on desktops.

I still had a problem, in that YouTube kept saying something was wrong with one particular file, even though it was quite small when converted to mpeg4. It turns out that YouTube goes by time, not file size, and allows only 15-minutes maximum play time. However, when you verify your account using a mobile phone number, Google will send you a text code that gives you up to 2-hour lengths. YouTube is very non-informative about this fact, and it probably relates to an improvement resulting from Google taking over YT. Maybe the help pages and links will be improved in the coming months.

I found the information about how to get the extra size files (the link didn't just jump out at me) by searching videos in YouTube (of course). I found several, the best and simplest of which, I think, is How to Increase Your Upload Limit on YouTube. 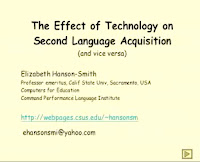 With an officially "verified" account and armed with the increased upload limit, I got my video up. See The Effects of Technology on SLA, a talk I gave at TESOL New York, 2008, in either .avi format (a little clearer, below) or .mpeg4 at my YouTube channel. Just FYI, this was originally a Powerpoint slideshow saved as a Powerpoint movie.  I may yet get around to putting the .mov version up, but you can play it with most video players on most platforms anyway.

Using QR in the Classroom

You may have noticed increasing uses of QR (Quick Response) codes, for example, to make a trail of ecology facts in a national park, or to provide a self-guided tour of a museum exhibition. I've returned to this YouTube video, from the American TESOL Institute channel, several times, as it has some great ideas for using QR (Quick Response) codes with students:

The video describes what QR is, how you can make your own, and how you can teach students to make their own for content-based projects, to link to podcasts, to make electronic portfolios, etc. For example, as seen in this image, students can scan the QR with their mobiles to get more information about skeletal structure. 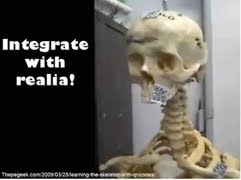 If students construct the content they create reusable learning objects for subsequent classes to read, listen to, and improve.

Thanks to Webheads for finding this great video originally. There are a number of other videos on QR with more ideas in the YouTube sidebar.
Posted by Elizabeth H-S at 15:59 1 comment:

For the most recent updates on good resources, please see the list of Diigo posts to the CALL IS VIRTUAL SOFTWARE LIST (sidebar below). Or visit CALL_IS_VSL. Dr. Elizabeth Hanson-Smith provides consulting to a variety of organizations and individual schools.

Labels in this Blog

My Recent Posts in DIIGO